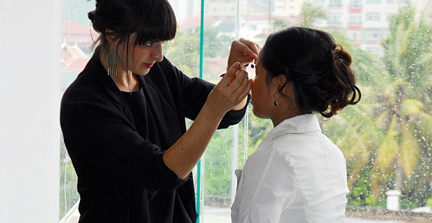 Matthew Fairfax could really use an IPA right now. Partly because good beer is hard to come by in his adopted home of Phnom Penh, the capital city of Cambodia. But mainly because his time here has been so emotionally draining. “I’ve probably cried more tears in the last couple years than I have in my whole life,” he says.

Moving there wasn’t Fairfax’s idea, at least not initially. He owns the James Alan Salon and Spa in Shoreline, and he was perfectly content to go on doing that when, in 2008, a client asked him if he’d help with a cause her church had recently taken up—specifically fighting the trafficking of young girls and boys in Cambodia. Fairfax had a history of doing charitable work in the local community, but this was different. This was…another continent. “Hell no, I’m not going to Cambodia,” he remembers thinking. But he listened as she explained that many of the trafficking victims were children who had been purchased from orphanages. And after a two-hour conversation he was in.

Unbeknownst to Fairfax one of his stylists, Lauren Ebright, had also been following the issue. So later that year at a company retreat, when he asked his employees what their goals were for 2009 and she talked about going to Cambodia to help young women transition out of the sex trade, he stopped cold. It was too much of a coincidence. Less than a year later, thanks to Ebright’s pestering, they were on a plane to Phnom Penh.

Once there they met with several NGOs to pitch their plan: They’d spend three to six months teaching former sex workers how to cut hair, giving them a skill that—Fairfax and Ebright hoped—could help keep them off the street. And one after another, each organization told the pair that their idea was well intentioned but unsustainable. “And that kind of response is perfect for me,” Fairfax says now. “Because I’m like, ‘Fuck you, I’ll show you. I’ll make this work.’ ”

So he and Ebright thought bigger and came back in 2011 with a new idea. Rather than just pass on some skills that could be quickly forgotten, they’d open a teaching salon, where young women and men could work once they were ready. And while they were learning the trade, Fairfax would recruit established stylists from the states to work for a month or two at the salon and bring in enough money to keep the place running. He’d only need to solicit enough donations to open the salon. This time they got the go ahead.

The last four years have been a blur. There was establishing Justice and Soul, the nonprofit that has so far raised nearly $300,000 for the project, including $25,000 from Paul Mitchell. There was Fairfax’s decision in 2013 to move to Cambodia, which he’s still adjusting to. There was building out the swanky new salon, which finished in late July 2014—despite the contractors’ attempt to cut a few corners early in construction. But most important, there were the girls. Four have enrolled (along with two young men), and two will complete the program next year. And Fairfax? He’s already thinking about expanding. “We could build these salons all over the globe”—and hopefully in locations with better local breweries.